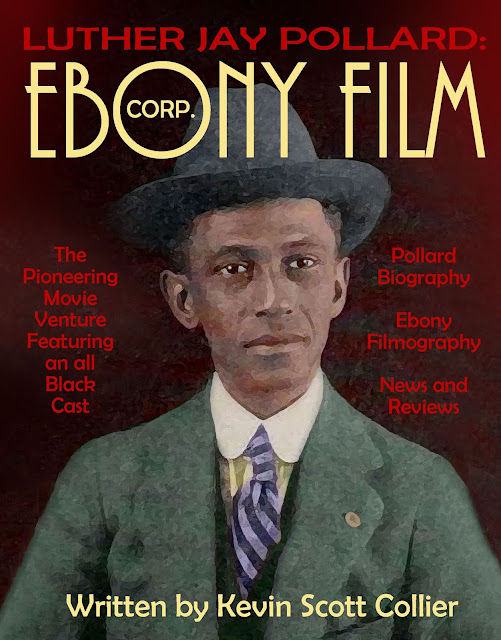 
In 1918, Luther Jay Pollard, born into a family of ambition and achievement, became the president of the Ebony Film Corporation, a silent motion picture venture featuring an all-black cast.

The company's notion was pioneering; instead of using whites in blackface (as was familiar in early movie making), why not hire actual African-Americans to star in comedy shorts?

Comedy quickly turned to tragedy shortly after the company's release of their first one-reel comedies in 1917. White investors, in creative control, began to crank out racist films and even scoop up previously released 'black buffoon' flicks and slapping the Ebony logo on them.

The black-owned Chicago Defender newspaper came out strongly against the company's direction, as well as white film critics in major magazines. White audiences cried out Ebony Film had crossed the line, as well.

Appointing Luther Jay Pollard as company president, and spokesman, to reinvent the tarnished brand, the corporation underwent some positive changes. Under Pollard's direction, whether as Black figurehead or authentic leader, "black dialect" text was banished from story cards in the movies, and African-Americans were placed in more conventional comedy roles. Pollard not only provided aspiring black actors with a staring point, he also was an early civil rights activist, regardless of what his critics said, and provided people of color training and experience in film making.

But the 'white folk' who had mindlessly inflicted damage on the venture sent Ebony into a death spiral, with many pointing to Pollard as a sellout and a puppet in the endeavor.

Luther Jay Pollard: Ebony Film Corp. presents an actual timeline of how the company emerged, identifies and names the white opportunists who sought to capitalize on the notion of an 'all-black film company,' presents a 21 movie filmography, and a biography of Mr. Pollard and the cinematic influence he had on the emerging film industry - one truly in living color.

The book also corrects repeated misinformation, such as Luther J. Pollard being the 'only black person' of its 46 investors. There were two, the other being Luther's father-in-law, Charles Barkley Roane, who was operations secretary when the company was founded.

The book also reveals Pollard's Chicago motion picture mail-order business he owned from 1911-1915, which has never been mentioned in articles or books previously. He even wrote and published the manual, How to Make Money in the Motion Picture Business, offered free through this venture, which sold movie projectors, movie cameras, film and even rented commercial films to private organizations and theaters alike.

Also included are photos from the films, and advertisements, the good and the bad, from the Ebony Film era.

African-American Chicago journalist Frank Marshall Davis said his friend Luther J. Polland was an "advertising salesman deluxe" and "a fast-talker." "He could jive a crippled Siamese cat into visiting a dog show."

A tale of comedy and tragedy. And in the center of it all, an incredible personality and salesman.


Email the author at: kevinscottcollier(at)yahoo.com

3d Printer Files
Posted by Kevin Collier at 7:42 AM 1 comment: